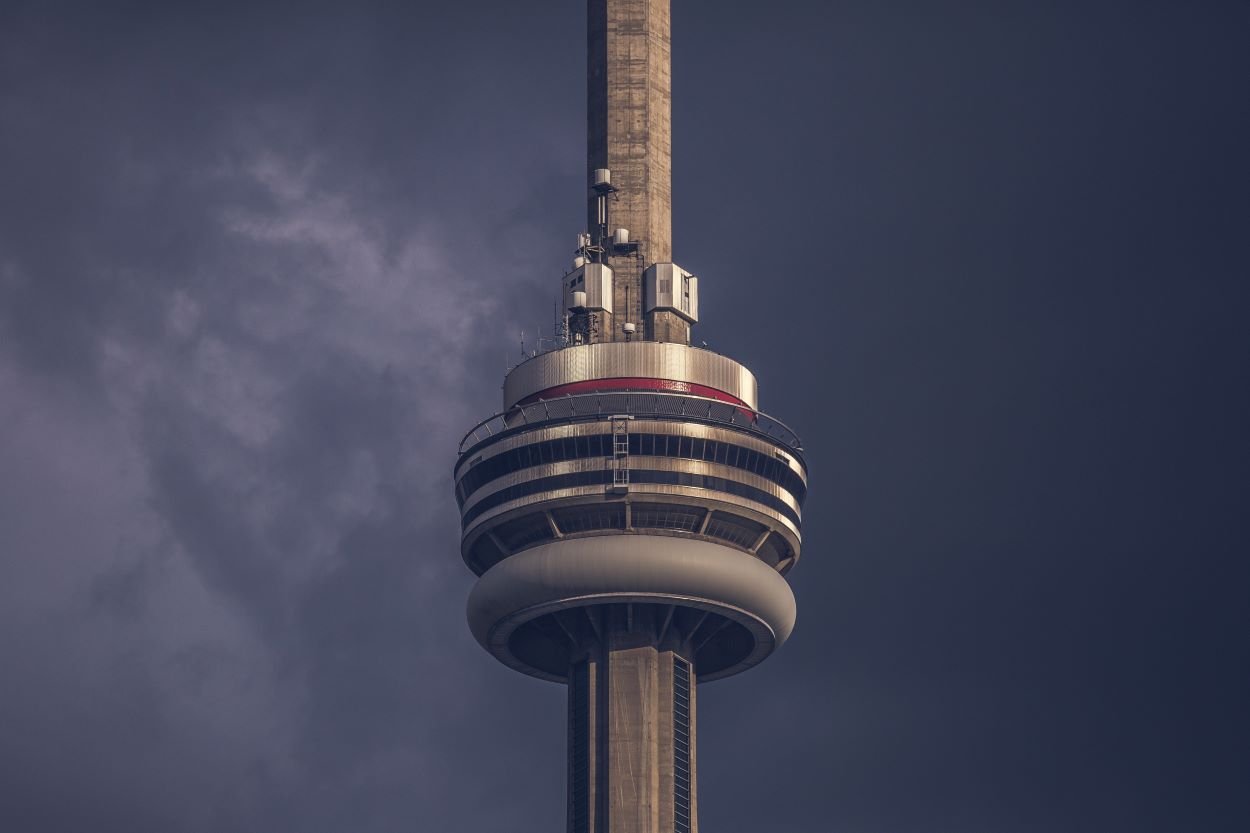 Posted at 08:00h in by Bella Caridade-Ferreira

It’s been a tough year for fund groups and platforms alike with Brexit and other worries cooling the markets. Initially, platforms were cushioned from the worst by ongoing DB transfer business, but by the second half of the year that business was also drying up. Year-on-year asset growth was a meagre 4%, while gross and net sales have plummeted. The economics are relatively unchanged, but investors have been spooked by Brexit and US-China trade wars.

Platform AUA fell by 6% over the quarter to £594.1bn at end December 2018. No platform was spared from AUA contraction apart from 7IM which brought TCAM assets on platform. Annual asset growth for the year was muted at 4% — or just £23bn — well below the asset growth of £99bn achieved in 2017. 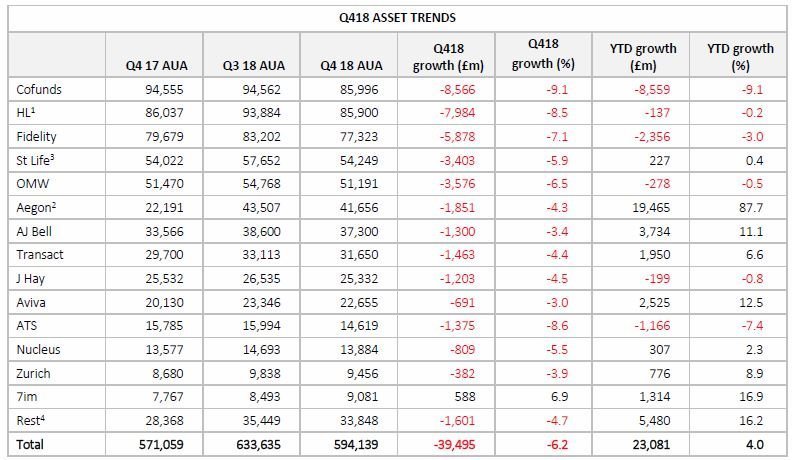 When markets are volatile, gross and net sales bifurcate as investors scramble to safe havens and/or withdraw. But gross sales also dropped in 2018 — a clear sign that safe-haven moves had already flushed through the system and new money was slowing to a trickle.  Annual gross sales were £115.5bn, down 5% against 2017’s £121.8bn. Net sales for the year were £44.5bn – a drop of £10bn against the 2017 total.  The chart below illustrates how net sales have begun to diverge from the AUA and gross sales trend.  Having been well above 50% until 2015, the net-to-gross sales ratio fell to a new low of 38.5% in 2018 – despite DB transfer business propping up platforms from 2016 onwards.

The downward trend is visible in the tables below with almost all platforms in the red compared to 2017, although some have performed better than others. Aviva’s substantial drop is closely linked to its re-platforming problems, while Standard Life’s similarly sized falls are linked to a slowdown in the DB transfer pipeline. 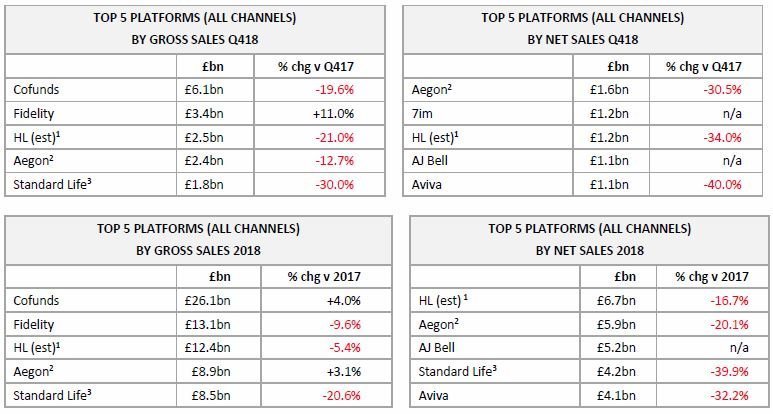 Bella Caridade-Ferreira, CEO of Fundscape said, “Fund groups, platforms, advisers and investors won’t remember 2018 with any fondness, but it hasn’t been as bad as we might think. The economic fundamentals were relatively unchanged, but the trouble is that investors were severely spooked by Brexit negotiations and the US-China trade wars. As a result, investors stayed away in their droves.”

Caridade-Ferreira said, “Pension flows have been high for a couple of years thanks to pension freedoms and DB transfers, but sales are down quarter on quarter and are returning to normal levels. 2017 was the year of DB transfer and platforms knew the gush was slowing to a trickle. But their withdrawal symptoms have been exacerbated by the mix of volatility and poor sentiment.”

In the retail advised arena, platforms were also home to lower assets and falling sales, but falls were not as pronounced.  Standard Life topped for both gross and net sales for the year, but a marked decline in Sipp business pushed it into fifth place for net sales in Q418.

AJ Bell, which went public in December 2018 and provided actual net sales figures for the first time, ranking it second for net sales in 2018.  The poster child for the platform industry, however, continues to be Transact — the first platform to go public and the only platform to have been home to an organic rise in gross and net sales for the year. 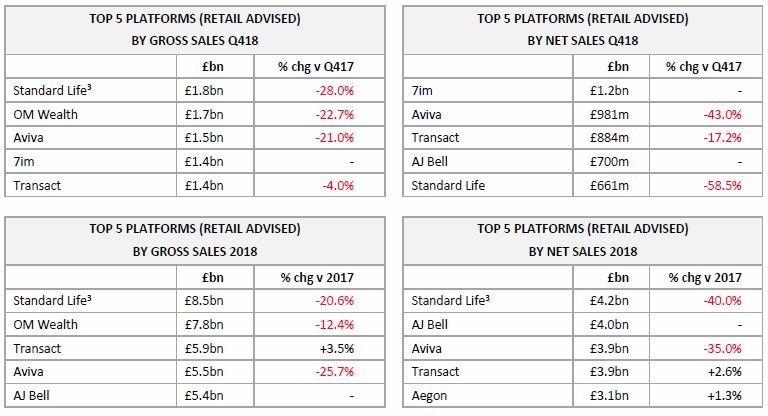 Caridade-Ferreira said, “Forecasting the future is always difficult, but it’s particularly hazardous when we don’t know what‘s going to happen on 29th March, so how 2019 will unfold is anyone’s guess. Having said that, if we leave with a deal things should start to return to normal in the second half of the year”.

1For timing reasons and because the data is market sensitive, Hargreaves Lansdown reports its figures to Fundscape a quarter in arrears. AJ Bell is preparing for stock-market flotation so its figures have been estimated.
2Arc only. Cofunds is shown separately.
3 Includes Elevate but excludes Parmenion.
4 Ascentric, Embark, Hubwise, Novia and Raymond James.

Photo by Matthew Henry on Unsplash