Posted at 10:31h in Blog, Products by Bella Caridade-Ferreira

Last Wednesday 2nd March, at a breakfast briefing hosted by Schroders, we launched the Gatekeepers report to a packed room of senior figures from the fund management industry. We were overwhelmed by the turnout — of the 50 groups that were invited to attend, 48 attended and demand has been such that we’re holding a second event on 30th March (if you’d like to be come, let us know). 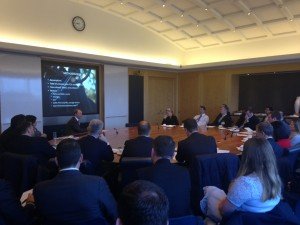 We presented our findings on fund selectors and buy-lists and how they  performed, as well as the factors that will increase the chances of a fund being listed. Our study covered the 36 gatekeeper (listed alphabetically below) from four different categories (ratings agencies, D2C buy-lists, adviser buy-lists and off-platform lists). Now that the process has been nailed down, we plan to add more buy-lists in the future including Discretionary Fund Managers.  To download the presentation click here.

As well as measuring the buy-lists over one, three, five and ten-year returns, we also evaluated the buy-lists using our Fundscape Factors, a weighted combination of seven different indicators ranging from assets under management to the Sales Performance Balance Ratio (SPB ratio) TM.  On this basis, we found that the leading gatekeepers (interestingly top three were all D2C lists) were:

In terms of overall representation on buy-lists, the top three fund groups were Schroders, Fidelity and Invesco. Among the underlying funds and fund groups being selected by fund lists, the funds with the most appearances across all fund lists were:

We also revealed our Fundscape Frontier Funds (currently a list of 99 funds from all sectors but could go up or down)  using the Fundscape Factors and which will be updated on a quarterly basis. We believe these funds should be considered for inclusion on buy-list, and to ensure they stand the test of time, we will evaluate the Fundscape Frontier funds alongside other fund selectors’ lists.

The future is bright

The Gatekeepers study is very much a work in progress.  As we waded through the lists and funds and refined our criteria, there were things that we wanted to analyse and delve into deeper, but which we had to set aside for the next phase of the study or we would never finish! We have already had gatekeepers submit their lists to us and the next stage will be  tackling the huge DFM cohort that is pretty opaque…