Posted at 08:00h in Blog by Bella Caridade-Ferreira

Each year we provide five-year platform projections and look at the main drivers of growth and change, and their significance for different stakeholders.

The world is literally changing before our eyes. The nationalistic mood sweeping through global politics is re-setting government policy globally and there is a similar mindset shift sweeping through financial services. Whether fund managers and platforms like it or not, in this low-growth world the old way of doing business is no longer viable or sustainable and investors are no longer willing to subsidise it.  That means increased focus on the cost of investment solutions and their component parts (advisers, platforms, fund managers…).

Of course, cost is not the only one factor. In this constantly evolving landscape, we believe that successful platforms will be those that perfect the art of using technology to deliver better, more intuitive user experiences and user journeys at the right price. It is not a question of scale, but a question of balance. Scale is not the only determinant of success because, as we have seen from the Cofunds example, size is no guarantee of success. It can mean sacrificing flexibility for increased rigidity and ultimately losing touch with customers. We expect further consolidation in the industry, but rather than the more obvious scale-driven acquisitions, we’d like to see more culturally driven mergers of like-minded wraps such as Nucleus and Transact and maybe even Novia (although Transact has recently announced that it will do an IPO in 2018).

Ultimately (but not in the next five years), platforms will disappear into the background and the primary focus will be on investment solutions and meeting investors’ long-term needs. The solutions will need to be delivered at a competitive price and that means a far greater use of passive investments and factor-based investing to provide low-cost investment solutions that work. As a result, active managers will be under pressure to generate alpha consistently while competing at much lower prices.

Looking back a year, we slightly undershot our realistic projection of £495bn, but still expect to be close at around £485-490bn by the year end (we won’t have this data until February 2017). The cheaper pound and lower interest rates pushed the UK stock market to new highs, but investors were reluctant to commit and as a result, sales-driven growth was lower than expected.  Despite market growth, the year has been particularly fraught with investment below par and investors sitting on the side-lines. Only long-term pensions have been active, underpinning the platform industry and literally keeping the wolf from the door.  Performance growth could be vulnerable to shocks in 2017 — Trump’s election knocked 2.5% off the stock market in November and globally investors are wary of a Trump administration — despite the FTSE 100 and the FTSE All Share Indices rising to new highs on the last day of the year.

So what of the future? There is no doubt that the UK is facing a prolonged period of uncertainty characterised by negotiations for our departure from the EU as well as the uncertainty surrounding the nature of a Trump presidency. And it’s not just a British/US thing. After almost a decade of austerity measures and low economic growth that has had a disproportionate impact on modest and low-income workers, a new nationalism is on the rise and the Brexit and Trump factor will undoubtedly be repeated elsewhere (Marine Le Pen and the French presidentials is a case in point).

These factors will not only weigh heavily on the economy, but also on investor sentiment. Fortunately, activity over the past four quarters has demonstrated that sentiment plays a smaller role when it comes to pensions. Indeed without pension freedoms, the outlook for the platform industry would have been much worse. 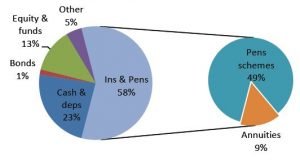 We expect pensions to continue to drive platform flows for the forseeable future, but what kind of volumes is it reasonable to expect? We started our analysis with the Office of National Statistics (ONS), which put households’ net financial assets at the end of 2015 at £6.3trn. Of this amount, 58% or £3.7trn was invested in annuities or pension schemes (including drawdown). The split isn’t known, but if we assume that drawdown assets are roughly the same volume as annuities, that suggests there is a pool of around £2-£2.5trn that will eventually make its way into the platform industry.

How much is likely to come into the industry on an annual basis is also difficult to gauge, although we can expect the volume of assets to accelerate as baby-boomers move into retirement and the population continues to age. The volume of assets that previously went into annuities (£15-20bn), is a good starting point for potential annual pension flows. This figure aligns with our pension data. Pension assets rose by £37bn this year, an annualised total of £50bn, while net sales totalled £17bn. Over the last seven years, pension assets have enjoyed a compound annual growth rate of 53%.

While assets are unlikely to maintain such a heady pace of growth, it is relatively safe to assume that there will be a constant and steady stream of pension assets moving onto platforms. The obvious downside is the drag caused by market volatility and weak sentiment. Although the compound annual growth rates for the previous six and 10 years are 23% and 35% respectively, we have taken a more conservative approach with a pessimistic growth rate of 13%, a realistic growth rate of 20% and an optimstic growth rate of 25%. 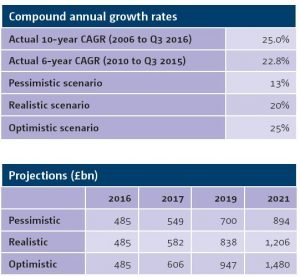 Our pessimistic scenario puts assets on course for £894bn by 2021. Brexit and other geopolitical factors will weigh more heavily in this scenario, particularly in the early years and interest rates will stay low for the foreseeable future. The economy will be sluggish at best or in recession at worst. Market volatility will be moderately eased by the steady uptick of pension business and the constant demand for income.

In the realistic scenario, economic and geopolitical concerns are offset with fairly strong pension business. In this scenario the prospect of interest rate rates to counter the inflationary aspects of leaving the EU is a possibility. If interest rates were to rise, cautious investors, many of whom have been chasing income for the last eight or years or so, could turn to cash and deposit products instead. Interest rate rises would also put pressure on disposable household income and depress savings levels. Demand for pensions will be maintained. Our realistic projection is £1,209bn by 2021. The constant is pensions.

In the optimistic scenario, the economy is on a firmer footing and the government has been able to negotiate a better exit from the EU than expected. Geopolitical factors will have a more moderate impact on the economy and The Trump presidency will turn out to be benign. Target assets in this scenario are £1.5trn by 2021.

Projections by channel and business segment are even more hazardous than industry projections. We expect retail advised business to grow steadily over the next five years predicated on the ongoing demand for pension advice and the steady stream of pension flows. 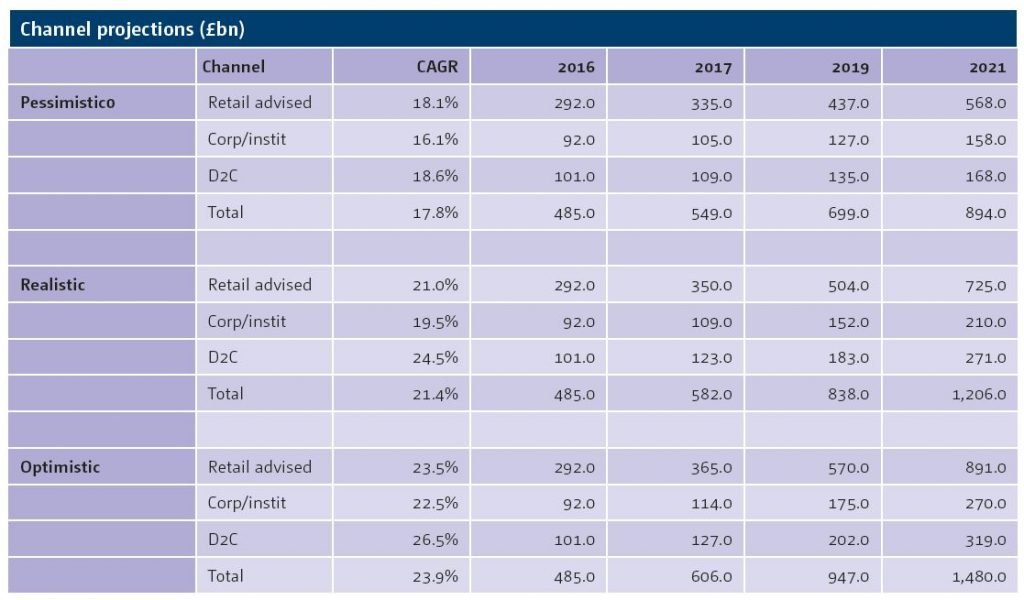 Overall, we expect the retail advised channel and the D2C channels to grow faster than the institutional/ corporate channel. Although the comparative success of auto-enrolment will ensure that workplace pensions will continue to grow at a steady pace, the channel is currently under-represented in Fundscape data and so it is difficult to make accurate predictions.

The D2C channel has surprised with its robustness. Sales this year have been strong and hardy despite the economic outlook and investors sitting waiting out the Brexit vote. With interest rates at all-time lows, there is an obvious gap in the market for simplified and and automated investment solutions for mainstream investors.

The FCA’s advice unit has the potential to bring innovative solutions by household names to the savings and investment market and this should encourage flows. Its recent report on the Asset Management Market Survey lends further support to encouraging investors into more passive-based solutions — whether this ‘encouragement’ is a good thing is another matter altogether.

Brexit, Trump and other potential nationalistic changes in Europe could affect investor sentiment for the next decade and be a drag on short-term investments (ISAs and the like). However, when it comes to longer-term pension investments, investors are proving to be more sanguine and pragmatic.  The pension factor will underpin the platform industry and ensure its growth in the long term. Stakeholders (from platforms, advisers to fund managers) should consider how relevant they are in a pension-driven investment world.